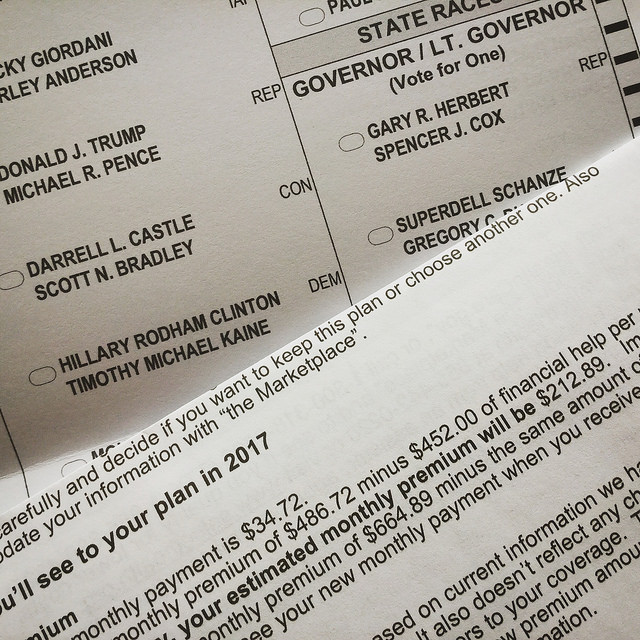 If you intend to vote for Hillary Clinton in the U.S. Presidential election, you are more than welcome to pay my soon-to-increase "Affordable Health Care Act" (aka "Obamacare") health insurance premium, which, effective in January, increases from $34 per month to $212 per month.

Or at the very least, please unfollow and block this account, and I will happily unfollow in kind... because we are not of the same kind.

Well, guess what? Y'all just made me into a criminal! I think maybe I'll take the $212 per month that I'm NOT going to pay to the health insurance companies and buy a couple of guns and a whole lot of ammo (while I still can). Then, when the gub'mint comes to get me for not paying my insurance premiums, I'll be ready to take some of 'em down with me when I go. I hope the insurance company toadies have good insurance!

Oh, and, most of the tax dollars I have been paying are already going directly into the coffers of the insurance industry, because the government is currently "subsidizing" the cost of this insurance to the tune of $450 a month.

How can anyone with even a single functioning brain cell believe that this colossal financial handout to the insurance industry is just or equitable or legal (despite the ruling of the U.S. Supreme Court... and leaked information indicating that the Justices were "pressured" about their ruling) in any way? Other than, of course, the scumbags who work in the insurance, banking, or medical fields?

How many times did I visit a doctor this past year? Or the year before that? Or the year before that? ZERO! How many prescription medications did I purchase? ZERO! I don't cost the insurance industry a stinking dime, but they are raising my rates – let me do the math for you, because as a Hillary supporter you're too damned stupid by default to understand numbers – by SEVEN-HUNDRED PERCENT!

Yeah, the rate increase is being covered, briefly and in a cursory, disingenuous manner, in the news today: "Obamacare" premiums will increase by double digits. Those headlines, and the numbers they use, are misleading. Those numbers are based on the full, unsubsidized premiums. The actual out-of-pocket premium increase for regular people, like me, are much greater.

As noted above, my particular plan is being subsidized at over $450 per month. A National Public Radio article says, "Rates Rise Again For Obamacare Health Plans, But So Do Subsidies." So it's no big deal, right? Even with a subsidy increase, my share of these absurd monthly rates will increase seven-fold, from dozens of dollars a month to hundreds of dollars a month. Hundreds of extra dollars I don't happen to have.

If you are supporting Hillary Clinton and the Obama legacy, please unfollow and block this Flickr account. If you believe the Affordable Health Care Act is about "health care," go insert sharp, rusty objects into your various bodily orifices and then unfollow and block. There's a YUUUGE difference between "health care" and "health insurance." This "Act" is not about providing health care services; it is a legislated transfer of wealth.

You know, back when the Affordable Health Care Act was being debated in congress, I attended several local "town hall" style meetings with congressional and senate representatives. At each of the meetings, a significant majority of the people present were vehemently opposed to the proposed health "care" legislation. Not just a vocal minority, but almost everyone. Nevertheless, the representatives said that they were listening to the advice of "experts" and were supporting the legislation. Because these meetings turned out to be so antagonistic, after the first few, the remainder were simply cancelled.

We are being ruled by the corporate elite. If you're one of 'em, if you work in the insurance or banking or medical industry, or if you are a state employee working in higher education, or if you are working for the federal government, woo hoo for you, your insurance premiums are probably being covered, and your company's profits are on the increase. Lucky you.

(As a former state employee who worked in public, rather than higher, education, I saw my take-home paycheck decrease every year as a result of increasing health insurance premiums. Ultimately, my declining wages (which declined despite occasional, paltry "raises" that did not even cover the increasing insurance premiums) contributed to my decision – not so much a decision as a necessity – to sell my home in a wonderful location and move to a smaller, dumpier house in a different, and far less pleasant, state.)

If you're not one of the fat cats, you know what to do.

I don't care who you vote FOR, as long as you vote AGAINST Hillary Clinton.
Collapse