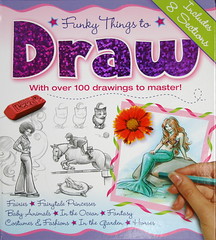 and ran across this gem. How could I pass up a book titled Funky Things to Draw, especially at a "bargain" price of only $7.99?

The book features diagrams on how to draw all kinds of, well, funky things. "Funky," in the context of this collection, would seem to be a euphemism for "girly." There are no tanks or battleships in this book, but it does provide pointers on drawing elves, fairies, gnomes, pixies, sprites, and dryads. It even has a tutorial for drawing a pillywiggin! Now, I know a thing or two about fairies, or faeries, having read Doyle back in the day, yet I've never heard of a pillywiggin. Nor, apparently, have Wikipedia (job for you,

zannah), or AskOxford. Lack of a Wikipedia reference casts considerable doubt as to the existence of such a thing. A Google search for the term, however, pulls up numerous links to lesbianism and Kate Bush, along with some World o' Warcraft stuff, most of which were only marginally enlightening... about pillywiggins, anyway. Funky Things to Draw identifies a pillywiggin as a "tiny flower fairy from Britain and Ireland.... [They] live at the foot of oak trees among the wildflowers... [and] ride bees."

I'll squirrel that away in my repository of might-be-useful-in-a-crossword-puzzle-someday knowledge. ( Collapse )
Collapse