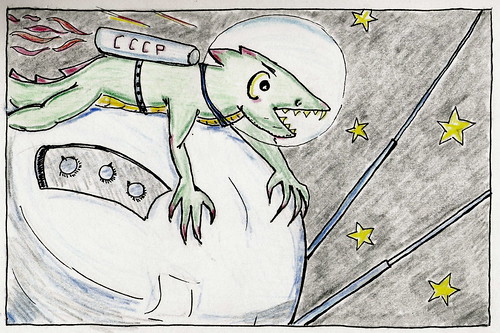 
Before the Russians sent the ill-fated Laika into eternal orbit, and before the Americans hurled any number of cuddly little rhesus monkeys to a fiery doom high in the stratosphere, Trippy (so he claims) was in line to become the world's first cosmonaut. It was during a rousing night of pre-launch, vodka-enhanced celebration on a chill Siberian evening back in 1957 that a Soviet engineer let slip the horrifying secret: the first orbital space passenger was carrying a one-way ticket! As soon as the bitter truth set in, Trippy wasted no time lamenting lost glory. He was on the next train out of Vladivostok, destination... anywhere, as long it was firmly on Earth!

An actual Soviet Sputnik satellite was on display at the NSTA conference in Boston. It is alleged to be one of only two existing Sputniks in private ownership (with five additional believed to reside in museum collections).

Where does one acquire a 1950s era Sputnik satellite? eBay, of course!

The satellite is featured in a recent documentary film, The Fever of '57, detailing the Cold War "space race" triggered by Russia's launch of the Sputnik. At the convention, the shiny chrome satellite was roped off, and, while available for photos, was under a strict "no touch" policy.

Ah, one must never underestimate the wily charms of a certain plastic lizard! The daughter of the director of the film happened to be in the booth that day; one of the booth attendants was willing to brave her wrath and submit my humble request to allow Trippy to pose atop the Sputnik. To his great surprise, and delight, I might add (Trippy's, too, judging by his multitude of squeaks), the request was granted, and Trippy proudly scrambled atop the shiny space vehicle for a quick photo op.

After the "snap" of the shutter came the "however" part: these photos may not, however, be posted on the internet!

Thus: artist's conception of Trippy and the Sputnik.

"So they replaced me with a dog," shrugs Trippy, knocking back a lukewarm, watered-down screwdriver while loitering on the tailgate of a '78 Dodge Ram pickup in the parking lot of a northern California 7-Eleven, reminiscing about his days as a space pioneer, "and put a price on my head. Never really expected to be sitting on top of a Sputnik again. What can I say... it was kind of a rush! It woulda been great, y'know? 'Cept for that 'one-way' bit."
Collapse