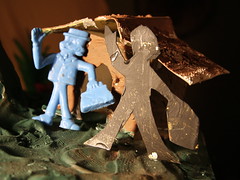 This is kind of spooky. The blue figure on the left is an old breakfast cereal premium of the character Passepartout from a 1970s animated cartoon series, Around the World in 80 Days. I've had this thing packed away in a box for a long time, and hadn't even thought about it in a similarly long time.

The figure on the right is a silhouette I cut out of paper a month ago to add to my "Mt. Fuji volcano diorama" to show the students at school. The figure is supposed to represent one of the students, Darby, as she returns home after shopping.

This is just too weird for me. Coincidence? Subconscious manifestation? I dunno. Strange, though.

I posted this image on Flickr.com last night, prompting P to wryly observe, "I think that's how Kaavya Viswanathan got started."