They were called "radio lamps" because they were designed to sit on top of radio consoles. In the 1950s they were superseded by... TV lamps!

This lamp is probably modeled after famous film dog Rin Tin Tin, who also starred in a radio adventure drama in the early 1930s called The Wonder Dog. So says Wikipedia anyway. 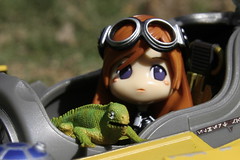 Off on another adventure
Collapse