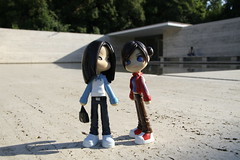 The girls checked out the über-cool, if somewhat pretentious, Mies van de Rohe Pavilion at Montjuic in Barcelona, Spain.

"Uhm... it looks like a small town library in Nowheresville, USA. Or maybe a welfare office."

"You mean the one that looks kinda like a mobile home and attracts bugs 'cuz of the lights? And the architect got sued and stuff?"